Commonly known as alcohol use disorder, alcoholism can be referred to as alcohol abuse in the most severe form. The individuals suffering from this disorder becomes incapable of dealing with their drinking habits. They feel as if they won’t be able to function normally if they did not drink alcohol. It can actually have a deep impact on their physical and mental health, and also their social, personal as well as professional lives.

In order to avoid any serious side effect of alcoholism, treatment must be taken on time.

Types of Treatment for Alcoholism

Getting professional treatment for alcoholism is a big decision and not to mention, the most appropriate one that individuals suffering from alcoholism can take. Each program for treating alcoholism includes various services. The comprehensive treatment programs include:

Alcohol detox is the first and undoubtedly the most important step of every treatment program. When individuals quit drinking, usually, they experience withdrawal symptoms that can be extremely uncomfortable and sometimes life-threatening too. Therefore, they must take this treatment program under the observation of specialists.

This kind of facility provides a structured treatment environment for treating severe alcoholism. The suffering individuals remain on-site until the program lasts, which may be 30, 60 or 90 days. During their stay, the specialists provide around-the-clock care and also help them prepare for a sober life. The treatment usually includes alcohol detox as the initial step and then continuum programs including sobriety maintenance programs, information on how to overcome triggers and many other such.

During the recovery period, alcohol counselors conduct frequent meetings with individuals to communicate and guide them about severe drinking problems. The counselors will also address the underlying issues that might trigger the drinking problem such as family or work issues etc.

What is alcohol detox?

The alcohol detox is the initial phase of treating alcoholism. This is the most important stage during the treatment process where alcohol is completely flushed out from the body and brain. Of course, the body will show certain withdrawal symptoms when it will not receive the chemicals it used to get from alcohol. These withdrawal symptoms include headache, fever, nausea, irregular heartbeat, etc.

The length of alcohol detox depends on the severity of alcohol use disorder (AUD) of the individuals. After a successful detox, the patients will be able to easily attend other aspects of recovery including, support sessions, therapies, and counseling.

Such kind of detox program is best suited for patients suffering from moderate to a severe alcohol use disorder. In this, the patients live inside the facility for days or weeks, where the professional medical team and other staff members monitor them continuously. The patients may undergo a medically managed withdrawal and psychological counseling by experts, after that.

Many outpatient facilities offer special detox programs for patients having lower-severity alcohol dependence, no history of serious withdrawal symptoms, and no other co-occurring disorder/s that can interfere with withdrawal. Along with medications, the patient is also offered counseling programs. This kind of detox program is successful for the patients having strong and sober support system at home.

Patients who are not at the risk of severe withdrawal symptoms can benefit from regular visits and medicine recommendations from the doctor at his clinic. It is quite similar to an outpatient setting, but unlike done in an outpatient detox program, they are not provided with any type of counseling.

What happens during alcohol detoxification?

Alcohol detoxification is preparatory and a compulsory step is taken before jumping to the next stage of alcohol recovery treatment. This is an initial step for all patients, whether attending an inpatient or outpatient rehab. But, because the withdrawal symptoms can be life-threatening, especially in the case of heavy users, they must take the detox process in an inpatient facility that has round-the-clock medical monitoring. The detox process usually involves the following three steps: 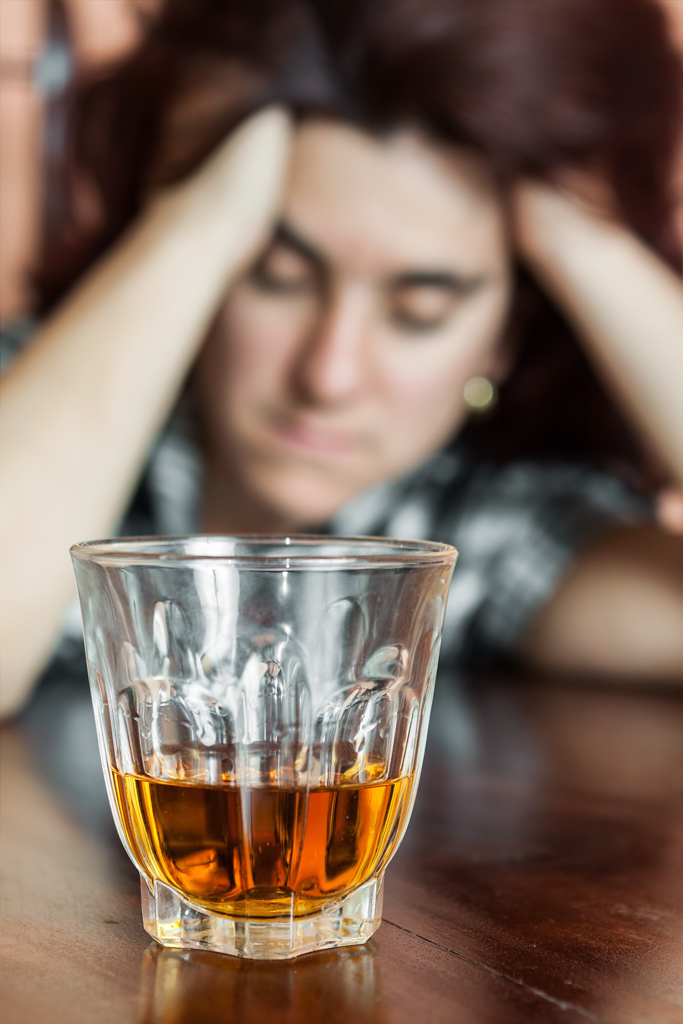 The phase 1 withdrawal symptoms appear within a few hours when the patients stop drinking alcohol. These symptoms may continue for days or weeks. The most severe side effects of this phase include:

This phase is generally longer and may last for several months. During this period, the patient’s brain may start to function normally. The withdrawal symptoms or side effects may include the following:

There are several medications available in the market that may be used for alcohol detox and recovery. Some of these may reduce the severity of symptoms, while some may lessen the dangerous complications associated with the detox process. These medications include:

Barbiturates like phenobarbital may be used to deal with alcohol withdrawal management and seizure prophylaxis.

Quite like clonidine, beta blockers can help to deal with some of the dangerous alcohol withdrawal symptoms, but these drugs actually manage cardiac symptoms, such as hypertension and rapid heartbeat.

Unlike sedatives, the anticonvulsants have less abuse potential and are therefore used for treating different withdrawal symptoms. Some commonly used anticonvulsants include: 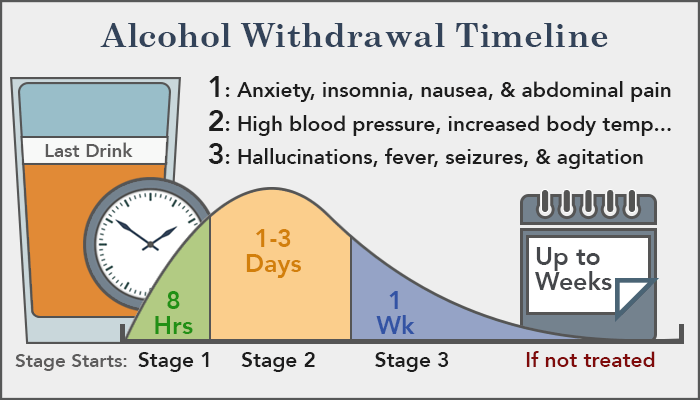 After quitting drinking, the withdrawal symptoms can appear in as early as two hours after your last drink. Although the painful symptoms may go with a few days or weeks, the mild ones may last for several months or years. The exact timeline of alcohol detox is hard to calculate, but here is a general outline of what to expect during a certain period.

During the first few hours, the patient experiences mild symptoms of alcohol detox, which may worsen with time. These generally include headaches, anxiety, nausea, and irritability.

As a day of alcohol detox comes to an end, the symptoms usually get worse. Along with the effects felt and experienced in the first 12 hours, the patient may also go through disorientation, hand tremors, seizures, and various other symptoms too.

During this week the patient is at a high risk of delirium tremens, which is one of the most dangerous withdrawal symptoms.

After the first week of alcohol detox, a lot of withdrawal symptoms will start to reduce. Some of them may persist for a few weeks and some minor symptoms can be completely treated with medications.

Sometimes the patients may experience post-acute withdrawal syndrome or PAWS which include withdrawal symptoms that my last for a long time. These symptoms generally are mild such as anxiety, trouble sleeping, low energy, delayed reflexes, and other such. These symptoms may take months or a year to go completely.

Alcohol detox is not a complete cure for alcoholism. It is just a starting point for the complete recovery program. It just detoxifies your body and brain of alcoholic chemicals in order to function normally. It clears the mind and heals the body so that the alcohol addicts can pursue the entire treatment and cure their AUD completely.  Different therapies and counseling programs will further help the patients to not only recover from their alcoholism but also live and maintain a sober life.

Fill in the form to get in touch.